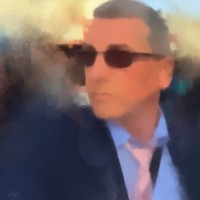 Born and raised in Arizona, I've lived in Texas, Brazil, and now call San Francisco home. I got a film degree (before most people even knew you could get a degree in film), worked art department on some features, TV miniseries, Movies of the Week, and commercials; taught TV production to at-risk youth; and have produced educational television for judges, court staff, and the public for the Judicial Branches of both Arizona and California. I've also done freelance visual effects work, film score, and general production. I enjoy all forms of creativity, so during down time you'll likely find me painting (either with natural media or digitally), composing music, drawing, or working on fun little animations. I'm currently writing and illustrating a children's book.

I maintain this website using only an iPad. The software I use for the web design is an app called SimDif, and it's remarkably powerful. While I could use a desktop-based editor, or indeed, could code the HTML, I find great joy in pushing technology beyond what it's generally expected to be capable of. On my video page, you can find a clip of special effects produced entirely on an iPad. My cartoon-style animations are produced on an iPad. Many of my paintings are produced on an iPad. It's just my thing....